The last time we provided any sort of official status on this was in late 2020. So it's time for an update.

In summary, that 2020 plan has been abandoned and we're currently working with Parks and Rec on incremental improvements to the existing facilities, e.g. improving the boatyard drainage and surface, fencing in the boatyard, adding a gate at the top of the access road, increasing dock space, and restoring electricity, lighting, and freshwater access to the area. We are making some progress in this regard -- see separate news items. This work is being financed by some generous donations to the Parks For All SYC Fund and Parks and Rec. More details can be found HERE.

Fencing has been installed around the boatyard. It is six feet tall with gates at the north and south ends. A gate has also been installed at the top of the access road leading down into the SYC area but it is only intended to be closed during SYC events. A little over half of the fencing cost is being paid from donations to the Parks For All - SYC Fund while Parks & Rec is covering the rest.  Parks & Rec also improved the boatyard drainage, spread more gravel and had a new pole with lights installed on the west side of the boatyard.

We are currently considering how best to organize parking spots and traffic flow in the boatyard. Parking spots will likely be numbered and assigned to each member. We'll hold a work party sometime soon to bring the club boats back from the south grassy area where they are being temporarilly stored. 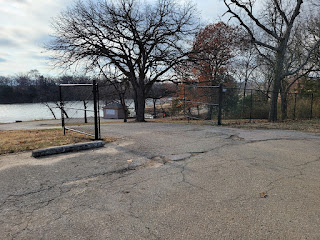 Seldom does one get to relive some of the great memories from their youth. I got to do just that last week at the MC regatta on Lake Lotawana.

The conditions were perfect for us. Winds were forecast to be 15 gusting to 20 out of the North. At about 14 MPH with just me on the boat, I have all the controls maxed out. Winds above that and I'm going into survival mode. Adding a second crew makes the boat comfortable to about 20 MPH. Choosing to use my Guss sail, which is slightly flatter, put us right in the sweet spot on boat performance. We balanced the helm by adjusting the boards up slightly, dropped the traveler maybe three inches and kept the boat nearly flat. Using the "ease hike sheet" technique we were able to keep the boat powered up and had great speed and drive.

Next important item was getting a good start. I like to be at the pin end with about 2 minutes to go. Sailing on Port tack against the hord of Starboard tack boats gives me great flexibility in finding a hole to start in. This worked well in five of the six races. In the third race the fleet was just all jumbled up with no hole developing and nobody really moving up towards the line in some sort of dash to start. We didn't start poorly but it wasn't our finest start. The start of the last race was really interesting. I was going to be early and was starting to look for some way to bail out. Looking left there was no one there! I turned back down and then back up. Had great speed and came off the line with an easy boat length lead that soon grew to three or four. If you roll off the starting line well, there are only a half dozen boats to race. Just like at Lake Shawnee.

So now you are rolling off the line what do you do? Half or more of the fleet will be killing themselves with backwind or poor positions. Wait a while and most will drop back leaving only a hand full of boats to deal with. Remember, it's a geometary game. The lead boats are usually taking the long tack first. Now it is consolidate consolidate consolidate. Every time the angles favor you consolidate. At Lake Lotawana with its lots of gusts and shifts, there are many opportunities to consolidate. Or be consolidated on if you are not looking.

One last thing. Leverage. When boats are separated laterally on the course, a small shift has a great effect. In the fourth race we were in second place with some gap back to the rest of the fleet. Because we could afford to lose some space we placed our boat well to the side needing only a slight shift to move us past the lead boat. We got it and won. That all sounds great but there were several times when I shouldn't have let others get out to the side on me and it cost me some places. There are times when I need to be conservative.